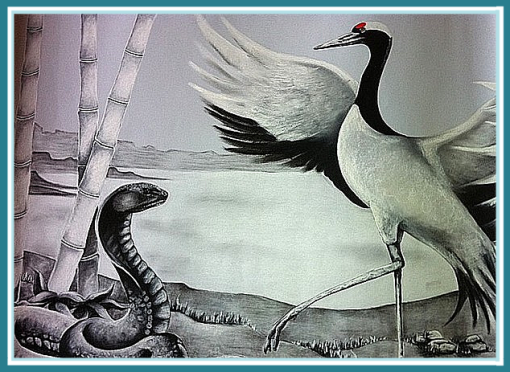 According to legend, a Buddhist nun named Ng Mui, devised the art of Wing Chun after she witnessed a fight between a crane and a snake.  She passed the art on to a woman by the name of Yim Wing Chun, who in turn taught her husband, Leung Bok Chau.  In her honour, he named the art after his wife; Wing Chun means "Forever Springtime".

It is often said that Wing Chun is a "hard" (yang) as opposed to "soft" (yin) style of Kung Fu. Whilst it is correct to say that many of the techniques are fast, explosive and powerful, it is not entirely correct to label Wing Chun in this way.

Wing Chun is is a system of fighting (used for self defence only) and hence does require the student to develop a certain level of flexibility, strength and stamina (mental as well as physical), but it is not necessary to have the flexibility of a ballerina, the brute strength of a weight lifter or the stamina of a marathon runner, to be an effective practitioner of the art of Wing Chun. Greater emphasis is placed on understanding the techniques taught and applying them correctly, so that the smaller can overcome the larger and the weaker the stronger.  Wing Chun seeks to find a balance between yin and yang.

As well as the physical side of the art, we place great emphasis on developing the traditional qualities and ethical behaviour expected of a martial artist: respect for oneself, one's teachers and fellow students and in a wider sense for society as a whole; responsibility for one's actions; dedication; effort and commitment; self control; humility and compassion.

The Main Hall and the Billet Studio

Do you want to become a member or do you want your child to sign up?

Recommend this page
© The Kwoon